Why there's no accurate movie of Dr. Jekyll and Mr. Hyde 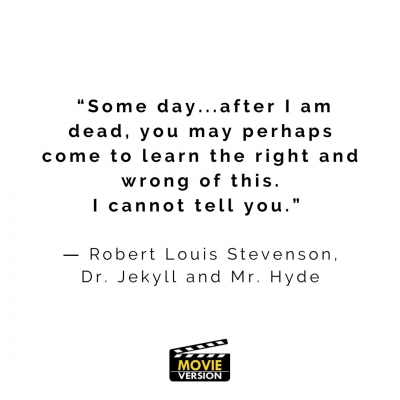 Is there an accurate movie version of the novel Dr. Jekyll and Mr. Hyde? The answer is no. Hollywood has produced seven movies of Robert Louis Stevenson’s enduring tale. Every one of them adds characters who are not in the book. All but two of the movies omit the important character of Mr. Gabriel John Utterson, Dr. Jekyll’s lawyer. Some of Hollywood’s biggest stars have been cast in the films, including John Barrymore, Spencer Tracy, Ingrid Bergman, Mickey Rooney, Miriam Hopkins, Jack Palance and Fredric March who won the Best Actor Oscar for his portrayal of Jekyll and Hyde in the 1931 movie version. For all their popularity, the films do not follow the book.

Why can’t Hollywood get it right when it comes to Dr. Jekyll and Mr. Hyde? Here are a few reasons . . .

• Dr. Jekyll and Mr. Hyde is a psychological story. The book is long on clues and short on action. The reader knows only what Mr. Utterson sees and knows. If a filmmaker told the story chapter by chapter, the resulting movie would be vague and boring.

• The details of Mr. Hyde’s decadence and debauchery are implied, but not stated. What did Hyde do when he went out on the town at night? Where did he go? The author Stevenson doesn’t say. He gives no specific details about Hyde’s activities. Stevenson hints that Hyde is up to no good, but he doesn’t spell it out. Is Hyde a thief? A rapist? A serial killer? A terrorist? Screenwriters have had free rein to fill in the blanks.

• The drugs Dr. Jekyll concocts present a challenge for screenwriters. In the book when Jekyll drinks the formula, the chemicals change his personality, but also his physique. Movies can’t recreate Jekyll’s transformation in the novel. The book describes Hyde as “dwarf-like” and “ape-like.” It is impossible for an actor to become shorter, so costume and makeup pros give Hyde dark, hairy skin. Since an actor can’t shrink in size, he stoops, slumps and bends over as he walks.

• Two crimes are not enough for movie audiences. The book states that Hyde trampled a little girl and beat a man to death with a cane. That’s it. Screenwriters are obliged to make up Hyde’s crimes and wild adventures. An easy choice is to add violence and scenes of Hyde’s sexual escapades.

• Women characters are invented to depict the depravity of Hyde. The only female characters in the book are a reference to a little girl Hyde trampled and an unnamed maid who happened to be looking out her window and witnessed Hyde murdering Sir Danvers Carew. Hollywood made a whole movie about the maid, Mary Reilly starring Julia Roberts. Most film versions portray Hyde as a sadist who abuses women.

• Casting big name actors and actresses in a film boosts box office revenue. Adding characters who are not in the book is a way to add star power.

• Dr. Jekyll and Mr. Hyde is a short novel with only 10 chapters, some of which are two pages long. Screenwriters must add more scenes to the story. Scenes that depict Hyde’s bad behavior have become the main plot of the movie versions.

The subtlety and mystery of the novel is its power and explains why it has endured as a work of literature. Robert Louis Stevenson deliberately omitted the details of Hyde’s crimes and sins. The author leaves Hyde’s antics to the reader’s imagination, making Dr. Jekyll and Mr. Hyde a sort of interactive novel that connects to the psyche of the individual reader. The uniqueness of the novel limits the possibility of an accurate movie version.

Which movie version is the best? Although the movie is not like the book, the 1941 film Dr. Jekyll and Mr. Hyde at least has the best cast of all the movie versions. Spencer Tracy plays Dr. Jekyll and Mr. Hyde. Ingrid Bergman plays Ivy Peterson, a woman Hyde seduces and holds under his spell. Lana Turner plays Dr. Jekyll’s fiancé Beatrix Emery. The three stars deliver memorable performances, and the story line is minimally accurate.